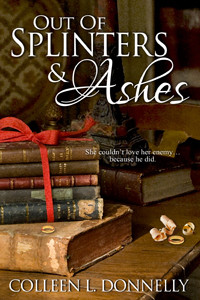 Out of Splinters and Ashes

She wrote for him and he carved for her according to Amabile’s novels, she a young German author and he a US runner in Hitler’s Olympics. An explosion sent him home to the US and left her pronounced dead in Berlin. Until her stories surfaced years later, bringing with them enough evidence Amabile’s characters may not have been fictional, neither was either one dead. Two families – one in Germany and one in the US – want to know if the evidence is enough to prove someone unexpected lay in their backgrounds. Two armies want to know, also, Germany and the United States as they search for the man and woman accused of exploding secreted military information. 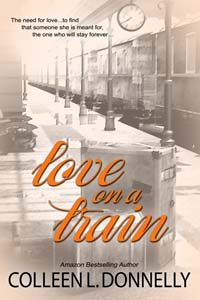 Love on a Train

The moment Martha noticed Raymond on the train, everything her mother warned against erupted – romantic notions, palpitating heart, the desire to write it all in a novel and tell the world. Martha lived and wrote that love story until the day Raymond handed her a sketch. “Want to see a picture of the girl I plan to marry?” The penciled profile resembled Martha… But when Raymond went away, she knew. She wasn’t the girl he planned to marry.

David was her father’s apprentice, everything Martha’s mother said made a good husband – hardworking, no romantic nonsense, no tolerance for writing about it. Martha added a fictional happy ending to her and Raymond’s story and published it. Cleansed herself of romantic love, and prepared to marry David. Until a copy of her book appeared. Full of sketches – Raymond’s version of their love story, drawings that enticed her heart to beat once again – for the wrong man.

“Love on a Train,” released February 5 2016 by The Wild Rose Press is about the right person – at the wrong time.

Lana was young when Cletus asked for her. Barely more than a girl when he offered to give Lana a home and her grandmother a pittance to help her survive if Lana would become his wife. Cletus was older, a widower who wanted a wife young enough to be uncomplicated and give him sons. He cared nothing about pretty, and he had no desire for a bride. Just a wife, and only sons.

Lana gave Cletus more daughters than sons, lastly giving him James, the one Cletus referred to as That Boy, the one he claimed wasn’t his. Isolated and without love, Lana forged ahead as mother, as a disappointing wife, the beauty Cletus dismissed in her seen by others who offered their support. Jim, her childhood friend, who never thought she’d be taken away so young to be someone else’s. And Mr. Morgan, Cletus’ nemesis, who said to James, “Your mother’s the most beautiful woman I’ve ever known.”

Did she or didn’t she? Was Lana faithful or not? James has the key, That Boy who looks nothing like Cletus, but who walks in his shoes more than anyone else.

Annabelle Crouse is determined to reopen her great-grandmother’s boarded-up house–and her shunned life. Many years earlier, after an unexplained absence, Julianne was relegated to a separate home by a rigidly unforgiving husband, and the Crouse women have suffered the disgrace of her assumed guilt ever since. Despite her family’s strong disapproval, Annabelle is driven to pursue her mission through cobwebs and dust, finding the clues and the coded story left behind by her great-grandmother — Why did she go? And why did she return? Annabelle has to know. Only one person, a man she grew up with but never noticed, stands with Annabelle as she discovers the parallels between her story and her great-grandmother’s–two women, generations apart, experiencing what love truly is.

View Mine to Tell Trailer

The nearly sixty-year-old pamphlet Rachel found contained everything her best friend, Lane, longed to know about the obscure history of his deceased great-grandfather. It touted the pianist’s musical prowess, his success as a college music professor, and his uncanny knack for bringing out the best in his piano students. Rachel couldn’t wait to show Lane her find, but the penciled-in comment at the bottom of the first page stopped her cold. “Justifiably shot in the back by his wife one morning as he was dressing, because of another woman.”

Neither Rex nor Regina wants a spouse, but they do have needs.

Ranger Rex Duncan needs a false identity – just long enough to uncover a ring of Kansas ranch thieves. Answering Regina’s ad for a temporary husband, he leaves his beloved red dirt of Oklahoma to assume that disguise. But the most obstinate woman he’s ever known confounds his assignment, and with hair the red color that has always made his heart beat a little faster.

Regina Howard needs a new Mrs. in front of her name – just long enough to reclaim her deceased husband’s ranch, since Kansas law won’t allow women to own property. When Rex answers her ad for a husband who can take orders as part of a brief business arrangement, she finds this stubborn man ignores her every command. Yet a good man is far more than just a name…

Available at Amazon and Audible 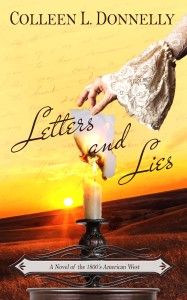 Louise Archer boards a westbound train in St. Louis to find the Kansas homesteader who wooed and proposed to her by correspondence, then jilted her by telegram – Don’t come, I can’t marry you. Giving a false name to hide her humiliation, her lie backfires when a marshal interferes and offers her his seat.

Marshal Everett McCloud intends to verify the woman coming to marry his homesteading friend is suitable. At the St. Louis train station, his plan detours when he offers his seat to a captivating woman whose name thankfully isn’t Louise Archer.

Everett’s plans thwart hers, until he begins to resemble the man she came west to find, and she the woman meant to marry his friend.

Soon to be released!