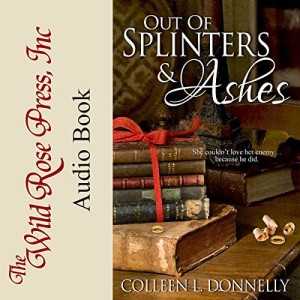 My award winning novel, “Out of Splinters and Ashes” is currently being offered free…handy for those of us stuck at home! A post WWII historical fiction story of a supposed affair between a US Olympic runner in Hitler’s summer Olympics and a young German woman, brings the ramifications of loving an enemy to the next two generations. Neither an ocean nor the long past end of a war is enough to heal broken hearts, dowse accusations, or set a family in Germany and one in the US on their feet. Walk with Dietrich and Cate as they set out to redeem each of their families and prove once for all no one can love an enemy…or can they?

Blurb for “Out of Splinters and Ashes” –

“Cate is a runner. She prefers to help her fiance run his New York senate race, but she finds herself running instead to fix what’s broken between her grandparents before he finds out – her grandmother has moved out of the family home, and her grandfather is accused of a pre-WWII relationship with a woman in Germany.

Dietrich is a German journalist with a spotless reputation. He prefers facts, but he finds himself lost in a world of fiction instead to prove his novelist grandmother couldn’t possibly have been the lover of a US runner in Berlin’s 1936 Olympics – especially when that runner’s granddaughter is Cate, a stubborn obstacle he should but can’t ignore.

Cate runs hard to cover up what Dietrich uncovers, until he shows her how it could have been–and how it could be again–that one can indeed love an enemy.”

To receive your code for a free download of this book, go to:  https://freeaudiobookcodes.com/book_details.php?BOOK_ID=2909

Then redeem that code here: https://www.audible.com/